We had to make a Glogster poster of the Blacks during the 1920´s. My group is with Luna and Tomas. This is our glogster. 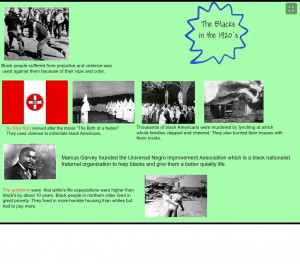 Our literature teacher, Pato Chujman, asked us to write an essay based on 2 questions. the one I chose is the following:

2. Explore amazement at nature and man-made in «Composed Upon Westminster Bridge»

In the poem «Composed Upon Westminster Bridge» you can see amazement by the narrator. It is very noticeable because he uses language like ‘majesty’ and ‘splendor’ and other to describe the beauty of the bridge. The narrator is at the bridge early in the morning. As London is so noisy and crowded, his first reaction to this serene and silent state is amazement. He was watching London with different eyes, he probably passed the bridge a lot of times but never experienced this… «Earth hath not anything to show more fair» he is struck and shocked, this is the most wondrous thing he had ever lived or seen. Nothing could compare to the beauty he was surrounded by. There is a comparison between the city and countryside. “The beauty of the morning…” “Ships, towers…” “…fields (…) sky…” and “Never did sun more beautifully steep (…) valley, rock or hill (…) the river glideth…”. He is attracted to both and is astonished because although both are really different, they are unique and breath-taking. To him, this is God’s gift of nature. Air has never been more pure, nothing will ever be more alluring than this landscape. He is full of joy, inspiration and vividness.

To conclude, the writer of «Composed Upon Westminster Bridge» is truly fascinated by the charm and fairness of the view. He believes, this location is unforgettable and cannot overlook it.

Our Language teacher, Pilar Pando, asked us to do write a letter to her family from the point of view of Patsy from «The Escape».

I am writing dis letter to tell you about my plan to escape. Although I do not want to leave my children, i can no longer live here with my abusive husband. He is a bully and won’t let me go to Jamaica to visit you. That is why I am obligated to escape and provide a better future for my children. I miss yu all and can’t wait to see you. I know that mother’s health is very poor at the moment so I want to be there for her and make her feel better. I am currently working at a factory, they are paying me twelve pounds. Eight are for my children and four for me. Hopefully in a little bit of time i will be able to save up enof money to go there. Also, Ms. Ruby, a friend of mine, is helping me financially and to trick my husband.

While reading «The Escape»in our Language class, with Pilar Pando, we had to look for vocabulary. On this slideshare, we illustrated the vocabulary words to make it easier to understand.

In our Language class, with Pilar Pando, we are reading the book «The Escape» by Milly Murray. This is a slideshare we made in class were we analysed the story.

Our Language teacher, Pilar Pando, asked us to prepare a test, here are the tasks.

1.Look for a biography of a celebrity or a person you admire  and post it in your blog. Write a short paragraph explaining why you have chosen him or her.(50 words)

Milena Kunis was born in Chernivtsi, Ukraine, in 1983. When she was 7 she immigrated with her family (her parents Mark and Elvira, as well as her older brother, Michael) to Los Angeles.  She had a rough childhood because when she first got there she didn’t know how to speak English and was in a very poor economic condition. They were determined to make a better life for their children. Mark, a former mechanical engineer, soon found work as a cab driver, while Elvira, who had taught physics in Ukraine, wound up running a pharmacy.

Soon, Mila started developing a passion for acting so she began taking acting lessons. She appeared in several television commercials but here big break was in the Fox sitcom That 70s Show in 1998. That show became a big success. Since then she has worked in lots of successful projects including Black Swan, Forgetting Sarah Marshall, Friends With Benefits and more.

The reason why I chose Mila Kunis is because she is one of my favorite female comedians. She is one of the most talented and down to earth actresses now. Mila is a true inspiration for all the girls my age, she is both beautiful on the inside and the outside.

2. Write an interview you could have had with that person and post it.What would you ask him/her? Use at least four different tense forms. (at least 15 exchanges)

Me: Hello Mila Kunis, it’s an honor to have you here tonight.

Mila Kunis: Thank you for having me here, it is my pleasure.

Me: What word describes you the most?

Mila Kunis: I would say that the word that describes me the most would be

Me: What inspired you to be an actress?

Mila Kunis: Well, I was really inspired when I lived in Los Angeles. Just watching all those people in television and on the cinema really motivated me to do it myself!

Me: I hear you are expecting, congratulations!

Mila Kunis: Thank you! When Ashton and I found out we were happier than ever. I’ve always wanted to have a big family.

Me: Do you already know any names?

Mila Kunis: We are thinking but we haven’t figured out a name we agree on.

Me: Can you tell me the gender of the baby?

Mila Kunis: No, I am sorry! We want to keep a secret.

Me: It is alright… Tell me more about your future projects. I’ve heard you want to produce.

Mila Kunis: Yes, acting is my passion but as I have been getting to know more this business I would like to expand my résumé.  Producing movies always intrigued me.

Me: Wow! I really look forward to watching your new projects. Well it has been real fun having you here but I am afraid our time is up.

Mila Kunis: Thank you for having me here!

3.Prepare an online questionnaire to check everybody´s knowledge of this famous person.  Try this one if you like:

I made this is quizlet.