Our Language teacher, Pilar Pando, asked us  to create an infographic about the passive voice. This is mine.

Our Language teacher, Pilar Pando, asked us to search for a crime report and look for sentences written in the passive voice and find vocabulary. This is my article.

Our History teacher, Lenny Ambrosini, asked us to work in group with a student from Senior 3 discussing a cause for ww2. I worked with Julia Molmenti and our topic was the Sudetenland.

After ww1, Sudetenland was taken away from Germany. In 1938 Hitler made it clear that he wanted the Sudetenland back, breaking the Treaty of Versailles.

Hitler was now very confident. Benes, the leader of Czechoslovakia was horrified by the Anschluss because he knew Czechoslovakia would be the next on Hitler’s list to take over. Britain and France weren’t prepared to stop Hitler, however they were bound to help Czechoslovakia if he invaded. Chamberlain asked Hitler if he planned on invading Sudetenland, he denied it, but in fact he wanted to.  The Nazi leader in the Sudetenland stimulated trouble among the Germans inhabiting and they demanded to be part of Germany. Hitler made it clear he was going to fight for it, if necessary.

Britain, France and the USSR were going to support Czechoslovakia if it came to war. Czechoslovakia was prepared to fight. Tension rose in Europe, people were getting ready for bombarding. Chamberlain met Hitler to make an agreement so he moderated his demands saying he only wanted some part of it.  Chamberlain thought it was reasonable and said there should be a plebiscite in the Sudetenland to know if they wanted to join Germany.  They were about to give the part he wanted but Hitler until he increased his demands. He wanted all the Sudetenland.

A final meeting was held in Munich to see what they would do with Czechoslovakia. They announced that Czechoslovakia was to lose the Sudetenland. They didn’t consult the Czechs neither the USSR.  Chamberlain and Hitler published a joined declaration which Chamberlain said would bring peace to our time. This is a cartoon by the British cartoonist Sidney Stube. It was published on the 3 October 1938 in the Daily Express

The cartoon shows, Chamberlain going head to head with Mars (the god of war) in front of a map of Europe.  Mars seems angry with Chamberlain as he had stopped a war when it looked inevitably. It is also important to mention the different objects on the table. Mars has weapons while Chamberlain has ordinary objects which represent Chamberlains’ achieving peace, not by force, but by his talking.

This cartoon is a form to demonstrate Britain’s point of view. Sturbe is prasin Chamberlain of avoiding war, showing him as the man who saved Europe.

‘We, the German Fuhrer and Chancellor and the British Prime Minister, have had a further meeting today and are agreed in recognizing the question of Anglo-German relations as of the first importance for the two countries and for Europe.

We regard the agreement signed last night and the Anglo-German naval agreement as symbolic of the desire of our two people never to go to war with one another again.

We are resolved that the method of concern our two countries, and we are determined to continue insulation shall be the method adopted to deal with any other questions that may con our efforts to remove probable sources of difference and thus contribute to assure the peace of Europe.’

(the famous ‘piece of paper’).

This source is part from a document read out by Chamberlain at Croydon Airport after his return to the United Kingdom.

After his return, Chamberlain was celebrated as the man who had brought peace to Europe.  On September 29th, Britain, Germany and France met in Munich where the had made an agreement to give the Sudetenland to Germany to avoid war.

Although this speech was said by Chamberlain both France and Britain thought war had been prevented, but in fact it didn’t. 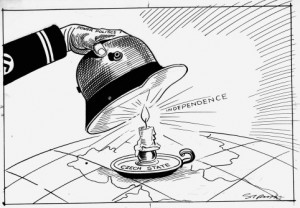 This cartoon, by the British cartoonist Sidney ‘George’ Strube, appeared in the Daily Express on 16 March 1939.

It shows the attitude of the British public towards Germany.

The Swastika and the Nazi soldier’s helmet symbolize the Nazi militarism. Hitler is the evil aggressor who annexes Czechoslovakia. The hand is labeled ‘power politics’ and it is seen as a force of injustice, bad faith and lies. Hitler’s annexation is a ‘breach of faith’ which breaks Munich. The light of ‘independence’ of the Czech state is about to be snuffed out. It represents Hitler killing the Czech democracy.

[Hitler] could make it appear – he, who, alone in Europe, had mastered the new technique of bloodless conquest, as the Anschluss and Munich had proved – that the President of Czechoslovakia had actually and formally asked for it.

William Shirer, The Rise and Fall of the Third Reich (1959).

At 6am on 15 March 1939, German troops poured into Czechoslovakia.  The anti-Nazi American journalist and historian William Shirer comments: ‘A long night of German savagery now settled over Prague and the Czech lands’.  Slovakia was given independence under German ‘protection’, and Ruthenia was given to Hungary.

This is a video, that shows Hitler’s determination and drive to have all of Sudetenland. It is very noticible, how he uses the excuse of ‘rescuing’ the Germans in the Sudetenland, to justify his demands.