1) The astrologer is a very clever and sly person. He is believed to tell the future and to know your past but he doesn’t. The reason why is that he gives open answers, something his clients would be content with hearing. One day, a stranger he tought he killed in the past (he was a former gangster) came to see if he was real. The only reason why he knew his past and what went on in his life was that he was the one to cause most of the stranger’s pain and anger. When he asks the astrologer when he would meet the person who scarred him, he told him he was no longer alive. Not only did the astrologer almost kill him but when destiny gave him the opportunity to redeem his mistake he lied! I don’t sympathize with the astrologer at all. I understand that we all make mistakes but the least he could have done was own up to his actions.

2) There is lots of irony in the story, especially from the stranger toward the astrologer. In fact, the stranger came to the appointment for proof that the astrologer was a phony and that his powers were fake. The stranger asked him “You call yourself an astrologer?”. In this question, though, you can see him defying and degrading him. When the astrologer actually read the stranger right he responded “Good fellow!” … “What else?” This is another case where you can see irony. We can infer that he is saying “You got one right! Try to guess the next one” in a tone that you tell a kid or your dog

3) I believe that the story is set in the United Kingdom, after the colonization of India. The reason why is because Town Hall Park is named and it is a place in England. The story also names a lot of traditional Indian thinks like “Jutka-drivers” and the “Pyol”. With that being said, I also believe it is set in the paat but not so long ago. 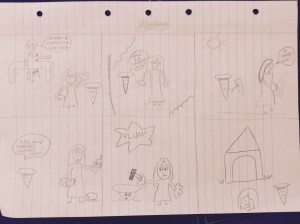 Our language teacher, Pilar Pando, asked us to write a crime story. This is mine

Mangled bodies have been turning up all over Ireland and the inhabitants are scared. Eight murders in eight weeks. All have had their eyeballs taken with spoon. Still nobody has a clue who the killer is.
Grace Bloggs Richardson is a clever, independent woman. It says it all in her name, “Grace” thats the way she wants to portray herself. She doesn’t know it yet but she is the only one who can stop the arrogant killer.
There is a problem which disturbs her life completely. Her lover, Monseuir Peter, is kidnapped, Grace finds herself thrown into the centre of the investigation. His only clue is a peculiar book. Which has been written in and unkown language.
She enlists the help of a curious author called Manthrali . Who helps by decoding the book

“The time will pass,
and it will go back as what once was,
and their dreadfull souls,
Wont be able to console,
for those who will not see,
and who will not be.”

What could that mean? What could Moseuir Peter have to do with this? She was very perplexed, it seemed that everytime she thought they were a step closer, it got more difficult.
Time passed and that is when Grace remembered that when she was visiting him in France, he told her that he was working on a very special project and gave her this necklace with a key. In case of need she could go to his house and unlock the door to go to the secret room. She remembered his voice, how he was quite serious and also a bit nervous.

The next week, there was another person murdered, with the same caracteristics. Only this time there was a sign of a key in the persons wrist. She went to the moseuir’s house and inside the secret room found a video cassete. It explained the whole situation, how he never wanted her to get involved in this mess. But made it clear that it was very important  for her to burn the key.

The following week, there was another murder. This one was of a familiar face, of the Monsieur Peter. The tenth murder and the last one. Inside his left pocket there was a note.

“You might have burned the key,
but you will always found a way to my heart.”