Our Language teacher, Pilar Pando, asked us to write an analysis about a story we read named An Astrologer’s Day.

The story «An Astrologer’s Day» begins by stating a normal day for the astrologer.  How he starts by spreading his professional equipment and prepares himself both from the inside and by the way he looks. How he passed through this crowded road and saw all different type of trades like: medicine sellers, sellers of stolen hardware and junk, magicians, and, above all, an auctioneer of cheap doth, who created enough din all day to attract the whole town. How everyday there was a different name for the store next door. He also talks about his ruitine, and how in a way he exploits and fools his clients. The reason his abilities were never questioned was that he gave open answers and also responded with retorical questions. He said things that made his clients content and satisfied.

One day comes a stranger (which we later find out that his name is Guru Nayak) which is one of the first to question the astrolger’s skills. He wants to disprove that the astrolger can actually know the past of someone and predict their future. As Guru Nayak starts asking questions, the astrologer figures out that the stranger who came was actually the person he tought he had killed as a young adult. The only reason why he knows his story is because he was part of it. The client is actually seeking for revenge, but first he needs to find the unknown man who did such a thing. When the astrologer is asked if that man is alive, he says he’s not to avoid the consecuences. With this action we can see how deceitful he is by the fact that instead of apologising or admiting his crime, he lied to his client. At the end of the story, the astrologer tells his wife of his actions quite concerned, which showed a more humane side of him.

Our literature teacher, Pato Chujman, asked us to wrie an essay abot the foolowing statement:

The most important theme in “A Horse and two Goats”, and in fact the central theme of Narayan’s work, is the clash of cultures. Do you agree?

In the following essay, I am going to develop on how I far I agree with the previous statement.

On the one hand, I believe that the theme of clash of cultures is very important so that the readers can see the contrast between this completely different cultures, and the way it gets ‘lost in translation’. Also, it adds a humorous touch to the story. In the story, «A Horse and two Goats» the clash of cultures between Muni and the american man is very evident. They both seem to believe their talking about the same thing, but they are talking about very different things. In the following extract, it shows the miscommunication because in one part when Muni is telling the american man about his childhood he believes he is talking about selling the statue. «(…) when he heard his grandfather, whose grandfather . . . ‘ The other man interrupted him with, ‘I don’t want to seem to have stopped here for nothing. I will offer you a good price for this.» There is an ironic end which is when Muni believes he sold his goats when he actually sold the statue which he loved.

On the other hand, i do not think it is the only theme which is critical in the story. I believe postcolonization plays a big part in the story. India is the setting for «A Horse and two Goats» which was previously colonized by the United Kingdom. In this passage you can see an example of how the colonization influenced India, «Can’t you understand even a simple word of English? Everyone in this country seems to know English. I have got along with English everywhere in this country, but you don’t speak it». By adding the historical background the reader can get a better idea on what the characters (in this case Muni) are feeling and how their everyday life.

In conlusion, I believe that there are two main themes which are postcolonization and the clash of cultures.

Our literature teacher, Pato Chujman, has asked us to research online for post colonial literature. This is because we were reading «A Horse and two Goats».

Post-colonialism in literature includes the study of theory and literature as it relates to the colonizer-colonized experience.

In many works of literature, specifically those coming out of Africa, the Middle East, and the Indian Subcontinent, we meet characters who are struggling with their identities in the wake of colonization, or the establishment of colonies in another nation. For example, the British had a colonial presence in India from the 1700s until India gained its independence in 1947. As you can imagine, the people of India as well as the characters in Indian novels must deal with the economic, political, and emotional effects that the British brought and left behind. This is true for literature that comes out of any colonized nation. In many cases, the literature stemming from these events is both emotional and political. 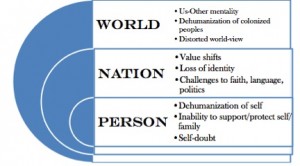 Said’s book ‘Orientalism’ (1978) is considered the foundational work on which post-colonial theory developed. Said, then, could be considered the ‘father’ of post-colonialism. His work, including ‘Orientalism’, focused on exploring and questioning the artificial boundaries, or the stereotypical boundaries, that have been drawn between the East and West, specifically as they relate to the Middle East. In doing this, Said focused specifically on our stereotypes of Middle-Easterners; however, these same ideas can be extended to include how we view all ‘others.’ This is the ‘us’-‘other’ mentality that many colonizers take with them into a new country. Such simple generalizations lead to misconceptions and miscommunications, which are often the basis of post-colonial analysis.

Homi Bhabha’s work, including ‘The Location of Culture’ (1994), focuses on the politics, emotions, and values that exist in the space between the colonizer and the colonized. In other words, cultures are more than ‘us’ and ‘other’; they are the sum of their histories. Bhabha likes to use the word ‘hybrid‘, meaning composed of mixed elements, to describe post-colonial people and experiences. In doing this, Bhabha focused on the collective effects of colonization on peoples and cultures.

Our language teacher, Pilar Pando, asked us to recorda dialogue were we could change sentences to reported speech.

Our language teacher, Pilar Pando, asked us to do a comic strip that could be added into the story that we read, «An Astrolger’s Day».