Our History teacher, Lenny Ambrosini, gave us the task to watch three videos about the Berlin Blockade (the topic that we are currently studying) and complete a chart and answer some questions. Here is the task. 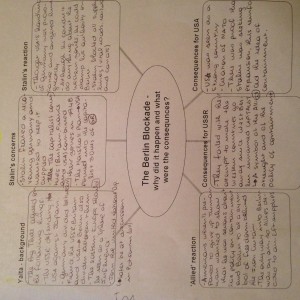 1. What was life like in Berlin in the post-war era?
Life in Berlin in the post-war era was very hard. It was divided into 2 big areas (one from the capatalist and one from the communism) which had very different ways to run their area but mostly acted on their interest. The western Berlin was run by the soviets which was very resented from the wars so wanted it to stay crippled and never recover. The eastern Berlin wanted it to recover so that they could later on trade with Germany. The countries that had control over Berlin were both too ocupated on their own hatred toward themselves and trying to have more power that they didn’t focuse enough on Berlin .Thats why most of the germans lived in very poor conditions missing the most crucial things in life like electricty and gass supplies.

2. How did Soviet policy towards Berlin differ from that of the West?
They had lots of differfences. To start, in the estern part of Berlin everything was Russian, the indusrties had been transported from Germany to the USSR. Everything was of the state (a communist principle), travelling outside Berlin was quite restricted, there was no publicity allowed, everybody was supposed to have the same things, not too luxuirous (like cars, buildings, clothing) and there were only wan type and brand of every product.

3. Why was reform of the German currency a key issue for both sides?

The reform of German currency was like adding fire to the flame. USA doing this was like a way for the eastern countries to show Stalin they are not backing down and to show their power. This was also a way to stabelize the currency since there was overinflation in Germany before. Stalin did’t like this at all, in fact he descrived it as ‘provocative’ since he too wanted to introduce their currency.

4. Why was the airlift such a major feat?

There were lots of thing they had to be very aware and careful about. Each day for about a year (except for when there was bad weather and/or dangerous to fly) they had to carry 5000 tons to the Eastern Berlin in 5000 flights that were 30 seconds away from each other. The pilots had to be exact with speed, consistency and timing.

5. In what respect can the USSR and US be responsible for further increasing tensions during the airlift?

The airlifts had caused a lots of tension since as USA sent these airplanes there was no certainty that they would arrive to East Berlin safely. This created a sense of unreliablity between the USSR, USA and the germans.

6. Why did Stalin eventually agree to talks over the airlift?

Stalin did this because it was coming to a point were it wasn’t benefit the USSR or its reputation. He couldn’t fight against USA since it was still recoveting and had to worry about its own economic, political and social problems.

Who was more to blame for Berlin becoming a major flashpoint in the Cold War, the Soviets or the Americans?
I believe they were both to blame because they both acted in an impulsive and unresponsible way. As they were both trying to show more power and importance in the world, they were indiferent to mantaining peace. For example, the airlifts from the Eastern Germany was very risky since the USSR could have reacted in an agressive way which could have led to war. Or maybe when the USSR closed all roads into East Berlin, it was a threat to the peace they had all been trying to achieve.