Our history teacher, Lenny Ambrosini, asked us to create a timeline from the years 1789 to 1795, in the French Revolution. There we would have to organize chronologically the most important events.

Our History teacher, Lenny Ambrosini, gave us the task to watch three videos about the Berlin Blockade (the topic that we are currently studying) and complete a chart and answer some questions. Here is the task. 1. What was life like in Berlin in the post-war era?
Life in Berlin in the post-war era was very hard. It was divided into 2 big areas (one from the capatalist and one from the communism) which had very different ways to run their area but mostly acted on their interest. The western Berlin was run by the soviets which was very resented from the wars so wanted it to stay crippled and never recover. The eastern Berlin wanted it to recover so that they could later on trade with Germany. The countries that had control over Berlin were both too ocupated on their own hatred toward themselves and trying to have more power that they didn’t focuse enough on Berlin .Thats why most of the germans lived in very poor conditions missing the most crucial things in life like electricty and gass supplies.

2. How did Soviet policy towards Berlin differ from that of the West?
They had lots of differfences. To start, in the estern part of Berlin everything was Russian, the indusrties had been transported from Germany to the USSR. Everything was of the state (a communist principle), travelling outside Berlin was quite restricted, there was no publicity allowed, everybody was supposed to have the same things, not too luxuirous (like cars, buildings, clothing) and there were only wan type and brand of every product.

3. Why was reform of the German currency a key issue for both sides?

The reform of German currency was like adding fire to the flame. USA doing this was like a way for the eastern countries to show Stalin they are not backing down and to show their power. This was also a way to stabelize the currency since there was overinflation in Germany before. Stalin did’t like this at all, in fact he descrived it as ‘provocative’ since he too wanted to introduce their currency.

4. Why was the airlift such a major feat?

There were lots of thing they had to be very aware and careful about. Each day for about a year (except for when there was bad weather and/or dangerous to fly) they had to carry 5000 tons to the Eastern Berlin in 5000 flights that were 30 seconds away from each other. The pilots had to be exact with speed, consistency and timing.

5. In what respect can the USSR and US be responsible for further increasing tensions during the airlift?

The airlifts had caused a lots of tension since as USA sent these airplanes there was no certainty that they would arrive to East Berlin safely. This created a sense of unreliablity between the USSR, USA and the germans.

6. Why did Stalin eventually agree to talks over the airlift?

Stalin did this because it was coming to a point were it wasn’t benefit the USSR or its reputation. He couldn’t fight against USA since it was still recoveting and had to worry about its own economic, political and social problems.

Who was more to blame for Berlin becoming a major flashpoint in the Cold War, the Soviets or the Americans?
I believe they were both to blame because they both acted in an impulsive and unresponsible way. As they were both trying to show more power and importance in the world, they were indiferent to mantaining peace. For example, the airlifts from the Eastern Germany was very risky since the USSR could have reacted in an agressive way which could have led to war. Or maybe when the USSR closed all roads into East Berlin, it was a threat to the peace they had all been trying to achieve.

Our history teacher, Lenny Ambrosini, asked us to watch a video talking about the Manchurian Crisis. This is because, at the moment we are studying the League of Nations in the 30s.

How does the video open? What might the connection between the League and the opening scenes in Poland be?

I want to mention 2 things about the opening scenes. Firstly what we see, which is Poland being bombarding, which shows the failure of the League to maintain peace. Then, it starts by saying «The League of Nations had failed, (…) it failed to maintain peace» with this two things we know

What problems did Japan face? (Mention ALL of them)

Japan had suffered the most from the Depression in Usa. This was because it didn’t have many natural resources so they had to rely on internation countries for exporting goods and raw material. Also their population was growing and there wasn’t enough jobs to sustain the people nor food since there had been an agricultural failure. They entered their convulsive period of history which was that the politicians took a secondary role while the military were the real authorities and madde the decisions.

What was the role of the army in Japan?

The army was very influential, strong and powerful in Japan. They controlled the education system which meant that they could adapt their thought into the people since they were young. The administration to martial arts was compulsary from a very early age.

The generals believed that the terrietorial gain of Eastern Asia would benefit the great empire of Japan.

What was the value of Manchuria?

Manchuria was rich in resources that the Japanese didnt have, but desperately needed for its economy. Japanese people also thought that chinese people were a sub-human raze, so it was a perfect way to weaken them and to be a step closer to their elimination.

Japan owned a railway in Mudken. Suddenly there was an explosion, which they accused the chinese for it. They said that it was neccesary for them to defend themselves and that the bomb was unacceptable. So they took the matter into their own hands and invaded Manchuria.

What did the League do about it?

China appalled to the League of Nations for help, who contacted the Japanese leaders and told them to withdraw. Japan’s army had other thoughs, and so the League send a member to right a report. It took about a year and their final decision was that Japan should leave Manchuria and that it should become a semi-independent country.

What was Japan’s reaction to the decision of the League?

Japan didn’t accept the League’s decision and decided to leave the League instead. This really showed how little authority and power the League had, and weakend its image greatly.  They had lost a very important member, which would later become one of their enemies since they would join Germany on WW2.

In the History class with Lenny, we were assigned different sources to analyze in groups. I worked with Mara, Lucila, Epi and Juan. Our sources were about the negative of the League of Nations in the 1920s. 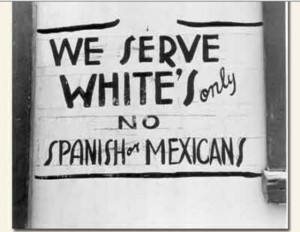 This is a Primary Source because it is a photo taken of a sign at the 1920s where immigrants were restricted.

This source deals with the issue of prejudice and intolerance. It shows that if you aren’t white you are not going to be serve. If you want to be served you had to be white. This is a racist message. It shows how black people and immigrants were treated in those years. By the time slavery was ended, in the US there were more black people than white.

The message of this source is how hard people faced intolerance and racism towards immigrants and black people. In this case Spanish and Mexicans were left apart. Those who weren’t white or Americans suffered discrimination. In 1924 the American government restricted immigration. This is a primary source; it`s a photo of people protesting about what happened to Sacco and Vanzetti. They two were victims of the red scare, which took place in USA in the 1920s. They were arrested on suspicion of armed robbery and murder. The trial became more about them being anarchists than of a murder, and six years later they were executed. This is a clear example of what was going on in the USA, the intolerance they had, how close-minded they were, the prejudice and the way they treated people who thought different. People noticed this, and realized that this was wrong and so, they supported Sacco and Vanzetti, they were on their side, and so they protested. This source is primary because the photo was taken in the time the event was happening and the author was a witness of the event.

In this photo you can see a police officer doing a surprise check on a Lunch Room to see if they had stored any alcoholic beverages, which after the prohibition law was passed was illegal.

The message behind this picture is that at the time police officers had to check constantly on the people in USA since they were desperate enough to break the law.It also shows the way they had to do it.The prohibition was negative because it increased the sales of drinks, the number of gangsters and illegal activities, and of deaths. This was because the banning of drinks made people more violent and critical to drink. Although in this picture the officers are doing their job honourably and correctly, there were lots of corrupt cops. You can see a lot of photos about prohibition since it was a very important and controversial part of the 1920s in the USA.

We were asked to create an interview to Hitler based on sources we find in our Diigo group. Here is mine with Luna and Sol. This is the interview we did.